Technical note discusses manufacturing tolerances. Once a satisfactory design has been achieved, the goal is to successfully fabricate optical elements.

Once a satisfactory design has been achieved, the optical element must be fabricated. The fabrication process determines the final shape and cosmetics of the surfaces. Surface figure specifications of an optical element are defined in terms of the wavelength of light. A comparison of the fabricated surface and a calibrated reference surface produces a pattern of Newton rings. This pattern shows the deviation of the fabricated surface from the surface of the calibrated reference. The resulting pattern consists of fringes that quantify the power and irregularity of the surface. The irregularity of the fringes represents the deviation of the surface from a perfect sphere. A sample interference test is shown in figure below, where a convex surface with a localized irregularity is compared with a concave reference plate. Three fringes of power and one quarter fringe of irregularity are shown.

Power and irregularity of a surface 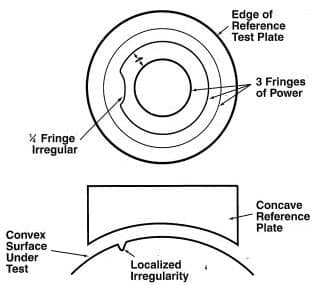 On a microscopic level, the fabrication process causes surface blemishes such as pits and scratches. Tolerances for these often are expressed in accordance with military specification MIL-O-13830, where the width of defects is specified relative to a master set of standard scratches and digs. The thickness of a scratch is specified in microns and the diameter of digs, pits and bubbles is given in units of 0.01mm. For example, a 60-40 specification sets limits of the apparent width of the #60 reference for scratches (60 mu) and a 0.40mm diameter for digs. The complete specification also limits the number of blemishes over the surface area. Refer to MIL-O-13830 for detailed information.