Spherical vs. Aspheric Lenses: How They’re Used in Imaging Applications

HOW THEY’RE USED IN IMAGING APPLICATIONS

Optical Lenses are often categorized by their shape. Two common surface shapes are spherical and aspherical. Each offers unique characteristics that make it suitable for different use cases.

Spherical lenses are so named because the surface is a section of a sphere. Thus, the radius of curvature is constant across the entire lens. The spherical surface causes light to converge (from a convex surface) or to diverge (from a concave surface), with the amount of focusing power proportional to the index of refraction of the glass..

The main advantages of using spherical lenses in optical systems are their simpler surface design and lower manufacturing cost. Spherical lenses can be fabricated using purely mechanical rather than computer-controlled apparatus. Depending on the lens size and the quantity desired, spherical lenses can often be polished in batches, saving considerable time in setting up the polishing process.

Spherical lenses have been used for hundreds of years. They are suitable for many imaging applications in a diverse set of markets. Almost every imaging system manufactured today –  binoculars, camera lenses, tube lenses, relay lenses, microscope objectives, and many more – use at least some spherical lenses. 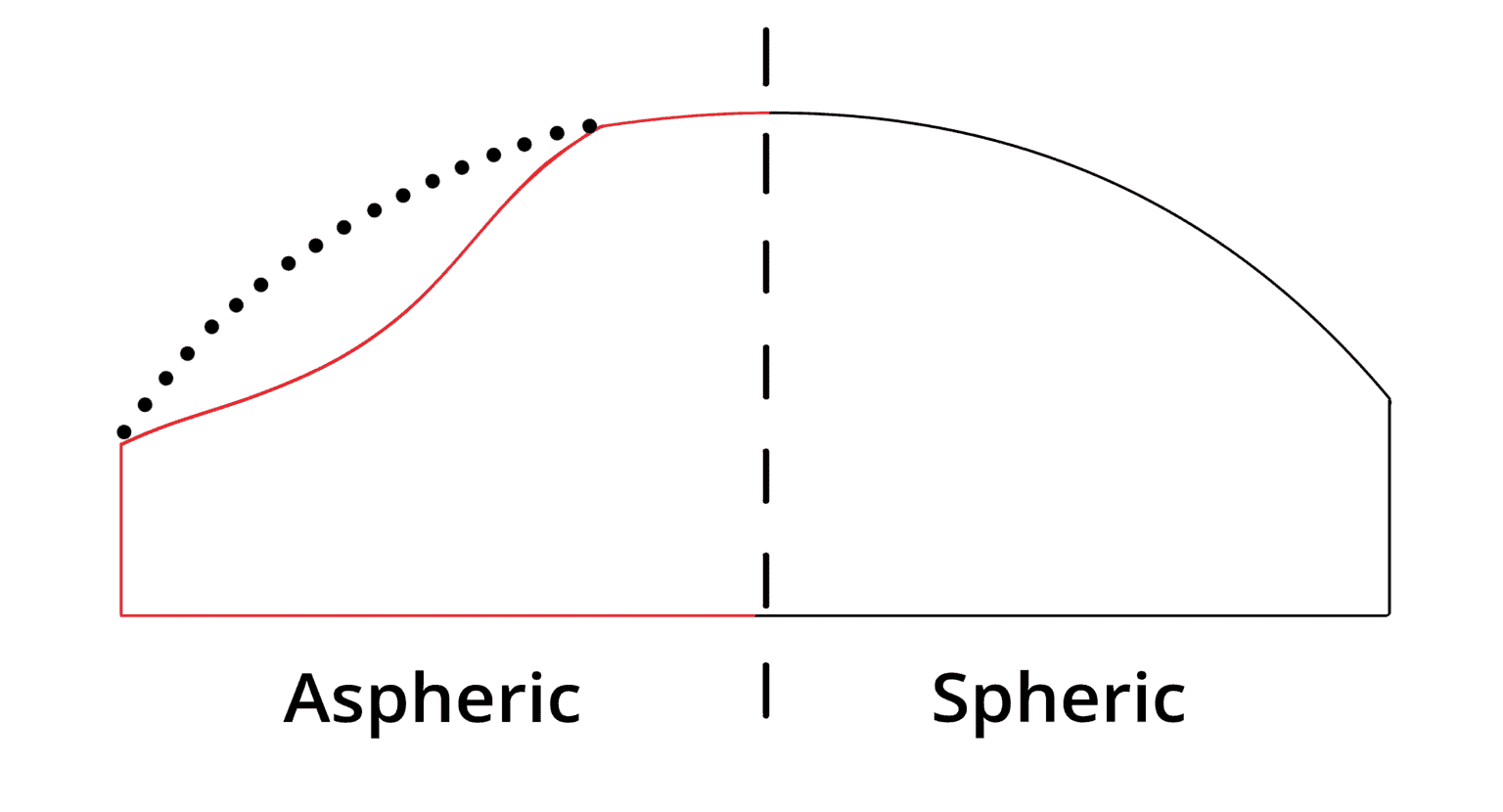 The variation from sphericity is often much too small to detect with the eye. It may be necessary to use specialized optical metrology equipment to determine if an optical surface is a sphere or an asphere. Other times, the aspheric surface is departs so much from a spherical shape that a person can easily see the difference. Some aspheric surfaces even have an inflection point or “gull wing” shape so that the surface changes from convex to concave between the center and edge of the clear aperture.

While the design and manufacture of aspherical lenses can be challenging, when constructed correctly, they can offer greater optical functionality than a comparable spherical lens. Some of the key benefits of using an aspherical lens in an optical application are:

A properly designed and fabricated aspherical lens focuses light without producing any spherical aberration, as shown in the example to the right in the figure below. Light that in incident on all portions of the clear aperture focuses to the same spot, producing a sharp, higher resolution image with a single aspherical lens instead of with multiple spherical lenses. 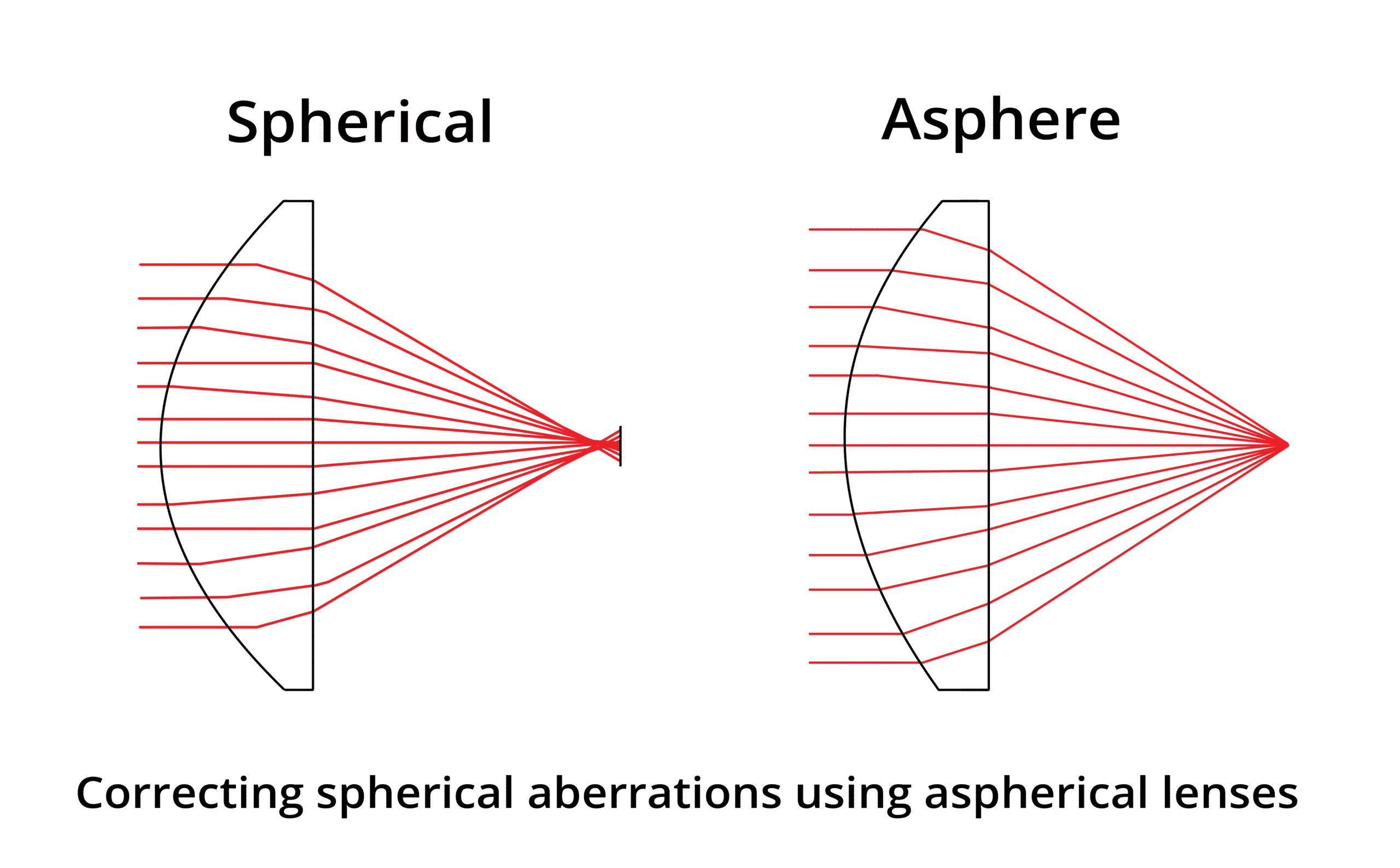 For the above reasons, aspherical lenses are used in many imaging applications. They are commonly found in microscope imaging objectives and other image lens assemblies in life science instruments, semiconductor wafer inspection tools, medical devices, and defense and aerospace night vision imaging optics that rely on precision optical components.

Use in Imaging Applications

Both spherical and aspherical lenses find application in a wide range of imaging applications in a variety of end markets. They enable engineers, researchers, and scientists to use equipment—such as advanced microscopes, laser scanners, and other imaging devices—to make very precise measurements.

Some examples of the applications where spherical and aspherical lenses are found include:

At JML Optical, we have designed and manufactured high-quality custom optical solutions for over 40 years. Our team has the knowledge and skills to develop and deliver spherical, plano, and aspherical glass lenses and complex lens assemblies suitable for some of the most demanding customer applications. In addition to our fabrication capabilities, we also offer the following services: